Home » NZ at war » Discover WW1 » Did you know? » The very picture of generosity

The very picture of generosity

Did you know that at the outbreak of the First World War, New Zealanders helped the Belgians and earned themselves a magnificent collection of paintings? 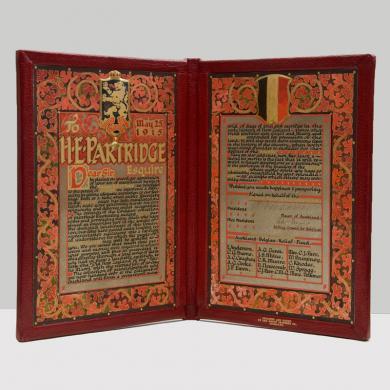 After seeking medical care for a daughter in Switzerland, a small family of New Zealanders was ready to return home when the First World War broke out. A train journey that would normally have taken less than a day became dangerous and lengthy as the carriages they were travelling on were stopped and the passengers questioned and searched by the authorities. How distressing it must have been too, to witness the mass flight of frightened and bewildered Belgians as they left their country in advance of the invading Germans. Such was the experience of the family of Auckland businessman, Henry Edward Partridge (1848-1931).

Less than a year later, on the 25th May 1915, a formal ceremony took place at the Auckland Town Hall in front of a crowd of some of the many New Zealanders who had contributed generously to the ‘Belgian Relief Fund’. The man at the centre of attention and the person responsible for spearheading the campaign was Henry Partridge. At the time he admitted to a reporter that he found it harder to accept the praise being heaped on him than the trials life had dealt him so far.

At this ceremony, Partridge was handed a cheque for a large sum of money by the Mayor of Auckland, a Mr J H Gunson. Partridge received it because of a bargain he had made which would result in his personal collection of more than 70 paintings being gifted permanently to the people of Auckland. The cheque was for £10,000 ($1.38 million in today’s money) and it was that amount that locals from the region and beyond had raised in just over six weeks. Partridge had declared that if £10,000 could be raised for the benefit of the Belgian people, then he would donate his impressive collection of portraits of important Māori and scenes depicting Māori life to the people of Auckland. He had employed the artist Gottfried Lindauer (1839-1926) to paint these works over a period of 40 years, with a view to preserve the likenesses of the important figures from an earlier time in Aotearoa New Zealand’s history. For many years Māori had been welcomed into Partridge’s home to view the portraits and when the numbers of visitors became overwhelming, Partridge had moved his ‘Lindauer Collection’ (now known as the ‘Partridge Collection’) to a dedicated gallery above his tobacconist shop in central Queen Street, Auckland.

Why, when the paintings were valued at around £25,000, was he considering giving his collection away? And why was Belgium the cause he chose to benefit from this generosity? The answer lies in the nightmare train journey that he, his wife and two daughters had endured as they tried to return to Britain at the outbreak of the First World War. In a newspaper article the following year, with the family safely back in New Zealand, Partridge recalls seeing first-hand evidence of the sacrifice Belgium made at the outbreak of the War, and this sacrifice was what inspired him. The Belgians held off the German advance for a week and in that time gave France the chance to prepare themselves militarily. ‘In one day at Dijon I myself saw two hundred train-loads of men and war material rushed away to the front’, he said. The call-out for donations began with a circular published in the daily newspapers on 3 April 1915. There was an immediate response that saw not only commercial enterprises and wealthy businessmen gifting, but also all kinds of other groups and individuals. Names and amounts were reported daily: ‘proceeds from the bachelors’ ball’, ‘pupils entry for swimming sports’ even a two shilling donation described as ‘contents of money box’. One farmer twice added to the fund with gifts from the sale of his sheep. In an open letter published in the Auckland Star on 21 April 1915, a group of descendants of those depicted in the portraits wrote to thank Partridge for his generosity. Accompanying a donation of £60 they added, ‘… it is also pleasing to our hearts to know that you have so faithfully adhered to your promises to our ancestors that their portraits should never be exposed for sale’.

By 22 May 1915, the £10,000 had been raised and the public and the City Fathers prepared for the gifting ceremony at the Town Hall a few days later. In a symbolic gesture the cheque was passed from hand to hand: from the Mayor to Partridge and then from Partridge to the Acting Consul of Belgium. In addition, Partridge passed on a document which donated the collection to Auckland Art Gallery to form a part of its permanent holdings of artworks. In handing over the cheque the Mayor commented that it was really a gift of £20,000; £10,000 for the Belgian Relief Fund and £10,000 for the ‘pictures that are now the property of the City’. A Fund committee member went further saying that it was strictly speaking a £30,000 sum as the Government had matched the people’s donation £1 for £1. The New Zealand Herald reported that ‘a presentation was then made to Mr Partridge of a letter of appreciation of his gift to the Belgian Fund’. Red and leather-bound with a beautifully illustrated patterned border and including gold calligraphy, the letter and facsimile cheque now form part of the archival collections of the E H McCormick Research Library at Auckland Art Gallery Toi o Tāmaki. They were donated by Partridge’s granddaughter, Valerie Hill, in 2009 and stand as testament to a modest man’s grand gesture. The letter includes the motto of Belgium, ‘L’Union Fait la Force’/ ‘Union makes Strength’ words that reflect how, by leading by example, Partridge inspired others to realise an outcome we are still celebrating a century later.