Discover the history behind the 'H series', a collection of official First World War photographs now freely available for anyone to download and use.

Article on Sanders by Chris Pugsley
Personnel file for Sanders 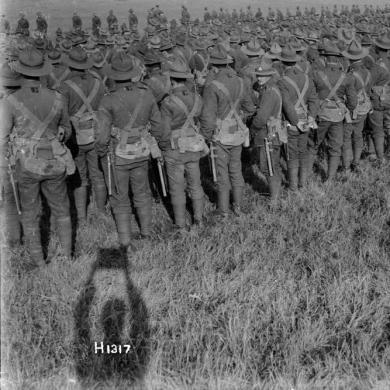 The ‘H series’– so called because of the ‘H’ in the identifier written on the negatives – forms part of New Zealand’s official war photographs collection from the First World War. These photographs of the New Zealand Expeditionary Force in France, taken primarily by Henry Armytage Sanders, provide the most comprehensive visual record of New Zealanders on the Western front from 1917 to 1918.

Many prints of these photographs survive and are held in various institutions and private collections throughout New Zealand, while the negatives are held in the Alexander Turnbull Library. The latter, now out of copyright, have recently been made available for anyone to download and use free of charge.

This was the first major conflict that New Zealanders had been involved in where people had become used to seeing photographs and films and pressure grew to see more of what life was like for the soldiers overseas.

However, it wasn’t until 1917 that the New Zealand Government arranged for an official cinematographer and photographer to record the actions of New Zealand troops. A reluctance, or an inability, to establish such positions because of the expense, meant that until then the only photographs taken of New Zealanders at war were ones that soldiers themselves took, or those taken by photographers from allied countries.

The British Sanders was an experienced photographer and cameraman who had been working for the film and photographic firm Pathé Frères. He was given the honorary rank of lieutenant and subsequently promoted to captain in October. This appointment was initially a surprise to the Defence Minister back in New Zealand, as Mackenzie had organised it through his pre-war contacts with Pathé Frères.

The arrangement with Sanders was that the New Zealand government would be responsible for supplying all photographic materials to him. He was to send his plates to be developed at General Headquarters (France), where they would be censored, and then forwarded to the War Office, who would then dispatch them to the High Commissioner. Sanders on the Western Front

The first 112 photographs from Sanders were received in London in late May 1917 and sent on to New Zealand on 1 June. It would seem that prints from this first batch of photographs appeared in the Auckland Weekly News on 23 August 1917, and in the New Zealand Herald on 25 August 1917.

By March 1918, over 400 prints taken of New Zealanders at the front had been sent back to New Zealand, and were being made available to the illustrated newspapers at 5 shillings a photograph.

These photographs of the New Zealand Expeditionary Force in France provide the most comprehensive visual record of New Zealanders on the Western front from 1917 to 1918. They record the soldiers’ day-to-day lives (training, cooking, playing, digging, marching), as well as meeting dignitaries, at funerals, on the front line, in hospital and in Germany after the Armistice. In 1918 the New Zealand command decided that they would like to offer prints for sale to the soldiers, and so they requested that Sanders come under their control rather than the High Commissioner’s. This change officially took place in early September 1918, and the NZEF took over the supply of plates, film and chemicals that the High Commissioner had previously been responsible for.

As part of this transfer of control, the Associated Press was asked to return all the negatives they had previously been supplied with to the War Records Section, which took over the management of Sanders, Scales and other photographers.

The motives behind this change appear to be the desire to make copies of official photographs available to the soldiers, and the possibility of making some profit from the sale of them. A secondary motive appears to have been that the army felt it would care for the negatives ‘properly’.

A report from the War Records Section in October commented that although there were over 1,000 negatives, they had not been catalogued or ordered in any way. The War Records Section started to do this work, as well as printing off nine copies of every negative: four to be sent to the Defence Minister in New Zealand, two to the High Commissioner in London, one to the British Ministry of Information, one back to the official photographer and one for the War Records files. As well as these, prints were run off as requested.

This work kept a staff of 14 busy, and produced thousands of prints.

After the Armistice in November 1918, Sanders remained with the NZEF and spent some time filming the New Zealanders in Germany. He also finished numbering the plates and compiling captions for the still photographs, as well as completing titles for the films he had made.

Sanders was officially discharged on 8 April 1919, but remained working on the titles for his films until at least September of that year.

As well as administering the work of the official photographers, the War Records Section had also been responsible for collecting trophies, photographs, pictures, medals, and uniforms that could form the basis of a national war museum. Along with the official photographs these were shipped back to New Zealand in 1919 and stored at Trentham Camp, Upper Hutt.

In September 1919 Cabinet established a War Museum Committee that consisted of Brigadier-General George Richardson, Dr J. Allan Thomson, director of the Dominion Museum, and James Hislop, Under-secretary of Internal Affairs. Its job was to ensure that the trophies collected were distributed appropriately and that other suitable material for a war museum, such as portraits of Victoria Cross winners, got underway.

In 1920 this committee decided that all the official war negatives should be transferred from Defence to the Dominion Museum, ‘which would arrange for the printing and despatch of photos to persons who desire the same.’ Three cases of the negatives were forwarded to the Museum on 29 July 1920, minus 52 negatives which were on loan to the publishers Whitcombe and Tombs.

The museum had already been receiving requests for prints from the negatives before then, and it appears by December 1920 they were able to start filling these, having arranged for Wellington photographer Francis Tomlinson to do the printing. It seems that in June 1921 the museum made a push to make the ordering and supply of prints more accessible, possibly encouraged to do so by the complaints of Arthur Hunter from Nelson, whose letter to the editor of the Evening Post in May 1921 complained that ‘In a little room at the back of the Dominion Museum there are some 1500 negatives of war photographs on the threshold of being consigned to oblivion …’

It appears that Hunter had also gone directly to Hislop about this, and a fairly disgruntled response from the Museum begins with ‘… it was quite unnecessary for this gentleman to rush into print …’ and goes on to list the ways in which ex-soldiers were being informed about the photographs. The Museum also suggested other ways they could be made more widely known, such as supplies of albums and order books to the various New Zealand Returned Soldiers’ Association (RSA) branches. As well as distributing albums to the RSA, sets of albums were sent out to the bureaus of the Department of Tourist and Health Resorts in Auckland, Christchurch and Dunedin, so members of the public could easily see them.

Displays of the official photographs were also put on at various exhibitions around the country, such as the War Materials exhibition in Wellington in 1923, and the New Zealand and South Seas Exhibition in Dunedin in 1925-26.

The push for a national war museum lessened in the post-war period, and the passing of the National Art Gallery and Dominion Museum Act 1930, which established the War Memorial Carillon in front of the new art gallery and museum (but no dedicated war museum) finally extinguished the idea. Twenty-three years later, in 1958, the RSA donated the entire collection of negatives, and four albums of photographs, to the Alexander Turnbull Library.

According to the report in the RSA Review, the negatives and albums had been held in a safe at the headquarters of the RSA and the impression given is that they hadn't been used to produce prints for some time.

Clyde Taylor, the then chief librarian, was quoted as saying, ‘These photographs and negatives are a notable acquisition to the treasures of the Turnbull Library and will go a long way towards filling a serious gap in our photographic coverage of the First World War…’ The ‘H series’ negatives and albums from the RSA remain with the Turnbull today, along with eight other albums containing a variety of ‘H series’ prints. Copies of the widely-reproduced photographs are also held in various institutions across the country. For example, Archives New Zealand holds the display boards put together by the Dominion Museum, and both Auckland War Memorial Museum and the National Army Museum at Waiōuru hold large numbers of the photographs. Many of these have also been digitised.

During the 1980s the Turnbull Library began to make file prints of the official photographs, so that the public could access them more easily. In November 2006 the photographic section put forward a proposal to digitise 1,838 glass plate negatives, from both the ‘H series’ and the UK series, as the collection was regularly requested by users. At that time 205 had already been catalogued. This proposal was approved and the negatives were scanned in-house over the following six months, and subsequently made available online. As part of WW100, the First World War centenary programme in New Zealand, these photographs (and many others) have been released into the public domain under a ‘no known copyright restrictions’ licence for anyone to use.

Almost 100 years after Sanders photographed New Zealanders on the Western Front, we look forward to seeing how they are used to commemorate New Zealand’s contribution to the First World War. If you find something interesting in the collection, or use the images in a centenary activity, leave us a comment below. We’d love to hear about it.