By:
Virginia Gow - Web Adviser in the WW100 Programme Office

More than 100,000 pigeons are said to have served in the First World War, some from as far away as New Zealand. 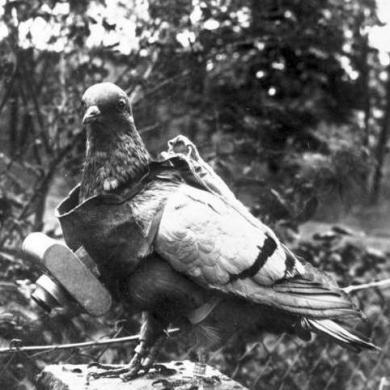 "When telephone, wireless, or any other means of communication breaks down," wrote an American committee on public information, "the 'winged wireless' will be relied on to keep communication open between the fighting front and headquarters."
It has been estimated that more than 100,000 homing pigeons were used to carry messages during the First World War. These pigeons are said to have had a success rate of 95% getting through to their destination. For every 20 birds released with important information, nineteen would get the message through.

The pigeon-express, winged messengers of war. A mobile 'dovecoat' or home for pigeons. Illustrated London News, 2 October 1915.
The German military also trialled using pigeons to take aerial photographs, but messenger pigeons were far more common. Typically these were released in pairs, each carrying the same message to increase the chance of success.
Towards the end of the war, New Zealanders were called upon to top up supplies of homing pigeons for the Western Front. "The New Zealand Government would be glad to receive offers of birds from fanciers in New Zealand", stated the Feilding Star in mid-1918. It was "desirable that the birds should be as young as possible" as younger birds were easier to retrain.
Several hundred birds were sent from New Zealand, but it is unclear if any saw active service.
The most famous messenger pigeon of the First World War was Cher Ami (Dear Friend), one of several homing pigeons released by the American Major Charles Whittlesey in an attempt to save his battalion, which had been cut off and surrounded by German forces in October 1918.
"We are along the road paralell [sic] to 276.4. Our artillery is dropping a barrage directly on us. For heavens sake stop it," was the urgent message that Cher Ami carried after the other pigeons Whittlesey released were killed.
Remarkably, even though shot through the breast by enemy fire and blinded in one eye, Cher Ami made it back to his loft with the precious message capsule dangling from his broken leg. As a result, 194 men were saved.
Cher Ami died of his wounds in America on 13 June 1919. He was just one of many heroic pigeons who had kept the communication lines open during the First World War.
Record of Cher Ami's heroic flight and message. National Archives of the United States. ARC Identifier: 595541