The week we went to war

By:
David Green - Historian at the Ministry for Culture & Heritage and Virginia Gow - Web Adviser in the WW100 Programme Office

Discover how events unfolded in the week New Zealand went to war, and 100 years later. 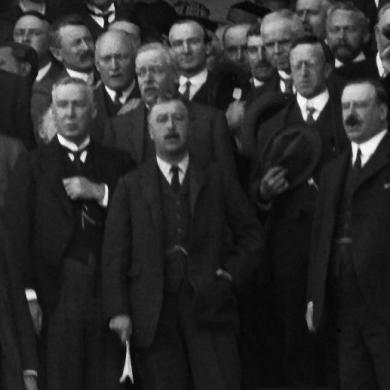 Politicians outside Parliament Buildings, upon the declaration of war, 1914.

As New Zealanders went about their daily lives in the winter of 1914, the European great powers were going to war.

In this article, we set the sequence of events 100 years ago on the international stage against historical happenings at home, in the order they occurred, in New Zealand time. You will see that once the ripples of those international occurrences began to reach New Zealand shores, we – not yet a fully independent country – moved quickly to support ‘mother England’. Over time, some New Zealanders would oppose this move.

One hundred years on from the week the world went to war, we are officially commencing New Zealand’s First World War centenary programme – an event which (in quite a different way) will also touch the experiences of many New Zealanders across the breadth of the country, as (like many other countries around the world) we focus on the impact of the First World War on our nation.

When historians look back on 2014, they too will be able to trace the various events leading up to and following the start of WW100, New Zealand’s centenary of the First World War. To help them out, we have also provided some links to current-day centenary events – an archive we’ll update with images and footage from the commemorations as they unfold.

Local time at midday in New Zealand in 1914: Franz Ferdinand and his wife Sophie leave the Sarajevo Guildhall after reading a speech on June 28 1914. They were assassinated five minutes later. (Courtesy of Wikimedia Commons and Europeana 1914–1918, Creative Commons Attribution-Share Alike 3.0 Unported)

Many commemorative activities are planned around the country. A new version of the WW100.govt.nz website records these, and features upcoming events.

6 pm, New Zealand time: War Stories, a series of films which tell personal stories about a range of New Zealanders who were impacted by the First World War (including some who did not serve), previews at the Beehive Theatrette, Parliament Buildings. Rt Hon John Key introduces the motion. Transcripts of all speeches are available.

Wellington city wants to borrow £365,585 ($55 million in 2014) on the London market for projects including a tunnel under Mt Victoria; Mayor JP Luke says that if war breaks out this will be hard to raise in the next five years.

There are no transactions on the Wellington stock exchange because of the war scare. The price of wheat on the Christchurch market firms.

Around 8 pm, New Zealand time: Prime Minister William Massey tells the House of Representatives that he knows of ‘no occasion for serious alarm’, but proposes to offer Britain a volunteer expeditionary force ‘if the occasion arises’. MPs sing the National Anthem. Massey’s offer is seconded by the Leader of the Opposition, Sir Joseph Ward. 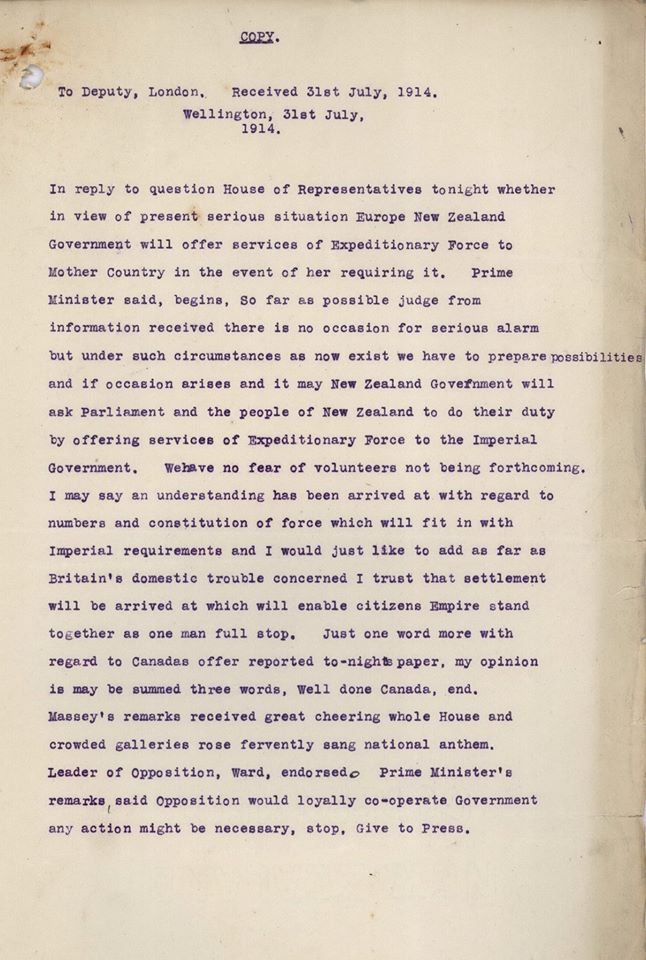 7 pm, New Zealand time: The Church of God Tabernacle, Tasman St, Wellington, announces that the apocalyptic Battle of ‘Har-magedon’ (Armageddon) is at hand. Around 5 pm, New Zealand time: New Zealand learns of German declaration of war on Russia; there is excitement at Parliament, and prayers for peace in some churches.

6.30 am, New Zealand time: Germany demands passage through Belgium for its troops (necessary to implement the ‘Schlieffen Plan’ to encircle the French army). The third member of the Triple Alliance, Italy, declares itself neutral on the grounds that Austria-Hungary’s invasion of Serbia was an act of aggression.

Secret alliance between Germany and the Ottoman Empire signed in Berlin.

Around 3 pm, New Zealand time: Massey tells the House that naval reservists have been called to their ships and the Garrison Artillery to their forts, which ‘will be fully manned day and night’; international cables are being censored; all ships entering the four main ports are being examined; the training ship HMS Philomel has been handed back to direct British control.

Postmaster-General Robert Heaton Rhodes announces that, since Sunday, war news has been posted outside post offices.

Around 9 pm, New Zealand time: Hundreds of boisterous young men serenade Massey at Parliament, then Ward at his digs, the Royal Oak Hotel.

9am, New Zealand time: The beginning of the First World War for New Zealand is marked at Parliament Grounds in Wellington, with a 100-Gun Salute being fired by the New Zealand Defence Force outside Te Papa during the service. A field of 100 white crosses is laid on the Parliamentary lawn by the The Field of Remembrance Trust. The event is live streamed. Preparations for the field of 100 white crosses with the old Parliament Buildings in the background, right. Photographed 31 July 2014. The field of 100 crosses on Parliament lawn, with the old Parliament building in the background. Photographed 4 August 2014. Students from Rongotai College perform a haka during the official ceremony at Parliament grounds. In the foreground, service people in present-day combat uniform, flanked by service people wearing replica First World War uniforms, showing the link between the past and modern day Defence Force. Photographed 4 August 2014.

Around 9.20 am, New Zealand time: The Saluting Officer, Major Anthony Robinson, Royal Regiment of New Zealand Artillery, orders “16 Field Regiment to fire 100 rounds to mark the beginning of the First World War for New Zealand.” Ten 105mm Howitzer guns fire one round each until 100 rounds have been fired (one gun refuses to fire). This is the first time in over 100 years a gun salute of this magnitude has been fired in New Zealand. 5 pm, New Zealand time: New Zealand Post staff take part in a Tribute March in Wellington to remember the Post and Telegraph workers who served in the First World War. New Zealand Post staff outside Te Papa at the end of the Tribute March. The start of the five-year commemorative stamp and coin programme from New Zealand Post.

Other events and activities are also planned around the country for the month of August and beyond.

Dominion Hannah’s ad: ‘The War will send everything up in price – even boots’.

Around 12.55 pm, New Zealand time: Telegraphed news of the outbreak of war is received in Wellington by the Governor, Lord Liverpool. 2.35 pm, New Zealand time: Eastern Maori MP Āpirana Ngata complains that telegrams can no longer be sent in Māori – yet French is acceptable.

3 pm, New Zealand time: The outbreak of war is announced by the Governor, Lord Liverpool, from the steps of Parliament. 4.10 pm, 4.55 pm, New Zealand time: The two houses of Parliament adjourn after resolving to take the ‘necessary steps’ to ‘have in readiness an Expeditionary Force’. 3.30 am, New Zealand time: The Committee of Imperial Defence meets in London; it decides to send six (reduced to four next day) divisions to northern France as a British Expeditionary Force, from 10 August New Zealand Time.

2.40 pm, New Zealand time: Massey promises to post official war news at Parliament and the Government Buildings; ‘all sorts of wild rumours have been flying about the town and the lobbies’.

4 pm, New Zealand time: Massey tells the House of Representatives that ‘it is now certain that the Expeditionary Force will be required’; whether Māori will be accepted for service overseas is up to the imperial authorities.

This is how events unfolded in the week New Zealand went to war in 1914. Did you attend a commemorative event or activity in the week we marked the 100th anniversary of the declaration of war? Tell us about it in the comments below, and add to the history.

Historical content (1914) researched and written by David Green, Historian at the Ministry for Culture & Heritage.