“Why do we commemorate?” – The RNZRSA 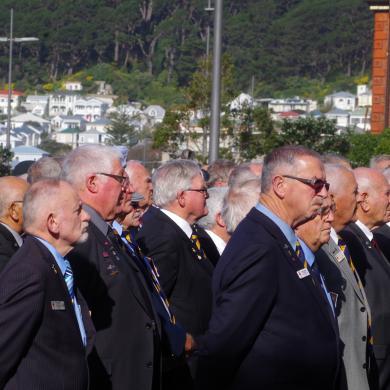 RSA members at Pukeahu in October 2016, marking 100 years since the organisation's founding.

The Royal New Zealand Returned and Services' Association's (RNZRSA) position on remembrance is rapidly changing. The return of World War veterans has largely set the national remembrance agenda but that approach is no longer suitable in the more complex operational environment that the New Zealand Defence Force (NZDF) has served in since the 1980s.

The RNZRSA believes an urgent discussion between stakeholders is required to decide how best to commemorate operational service by the NZDF since the end of the Vietnam War, some 40 years ago.

Although since Vietnam, NZDF deployments have been far more numerous, they have not captured the attention or imagination of the nation as the deeds of our forebears of the World Wars did, and continue to do so. In fact, there appears to be a curious national character trait that attributes the publicly acknowledged value of contemporary operational service in proportion to the number of casualties suffered.

An example of this concept from even the Second World War is the difference between the accolades placed on the exploits of the 2nd (NZ) Division in the Middle East and Italy as compared to the 3rd (NZ) Division, who fought the Japanese right in our own backyard.

Accordingly, the RNZRSA believes that many of the 30,000 veterans of post-Vietnam conflicts are thus reluctant to claim the title ‘veteran’, as they do not believe their service warrants such merit. This has real impact. They are hesitant to seek assistant from agencies like the RSA and Veterans Affairs’ – typically until crisis point, if at all. Remembrance also provides ‘dignity’ and ‘purpose’ – particularly during the very difficult period of transition out of the military – but having no tangible expressions of a national level of understanding and appreciation of their service and sacrifice leaves the modern veteran feeling somewhat ‘let down’ and their service of little relevance.

Going forward, the RNZRSA will lobby for an appropriate strategy for remembrance in the 21st Century that will leave these veterans and their future comrades in no doubt of the debt of gratitude the nation holds for them and that New Zealand will continue to support them when the effects of that service begin to impact on their or their families' and dependents' health and wellbeing.

Perhaps the first steps would be to ‘welcome home’ those veterans – and their families – who have served since the end of the Vietnam War, during the commemoration of the end of the First World War on Armistice Day 2018. This would deliberately draw a clear link from the past into the present; to illustrate to the nation that remembrance is a continuous spectrum, and that despite the end of that great conflict the need for New Zealand to call upon its military to send our men and women into conflicts overseas continues, and our national responsibilities to remember remain unchanged.